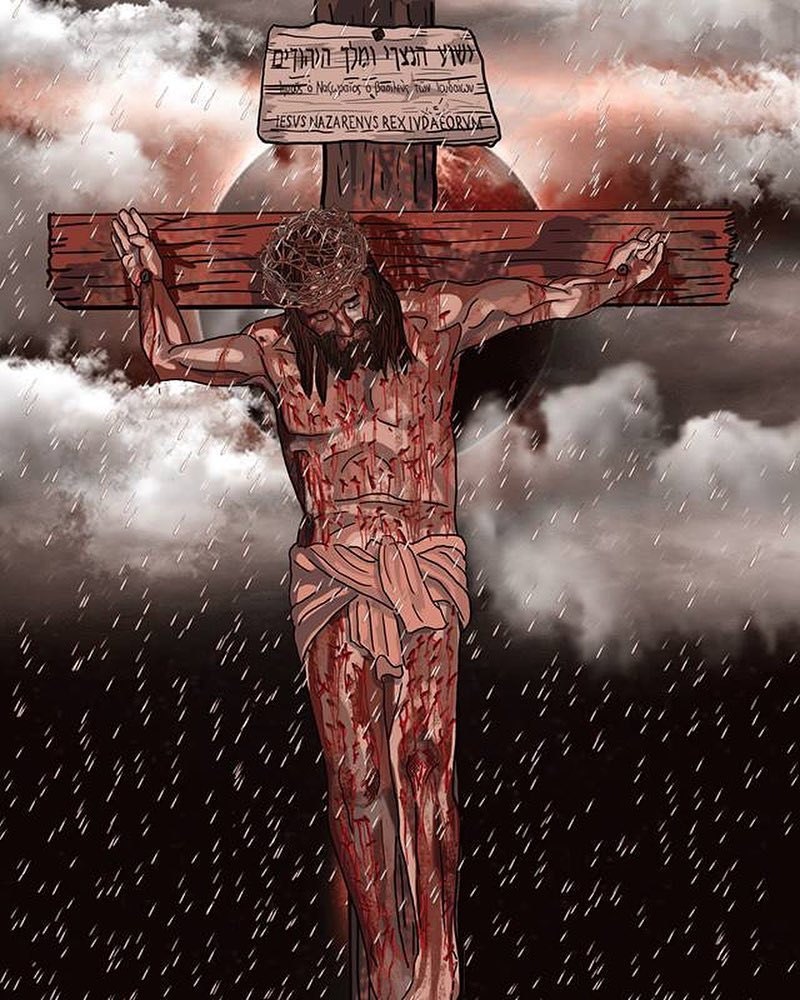 Often sanitized for our modern sensibilities, the Crucifixion of Our Lord was a terrifyingly violent and brutal affair for those who witnessed it. This depiction seeks to be as faithful to the reality of what happened as possible using forensic evidence gathered from the Shroud of Turin. 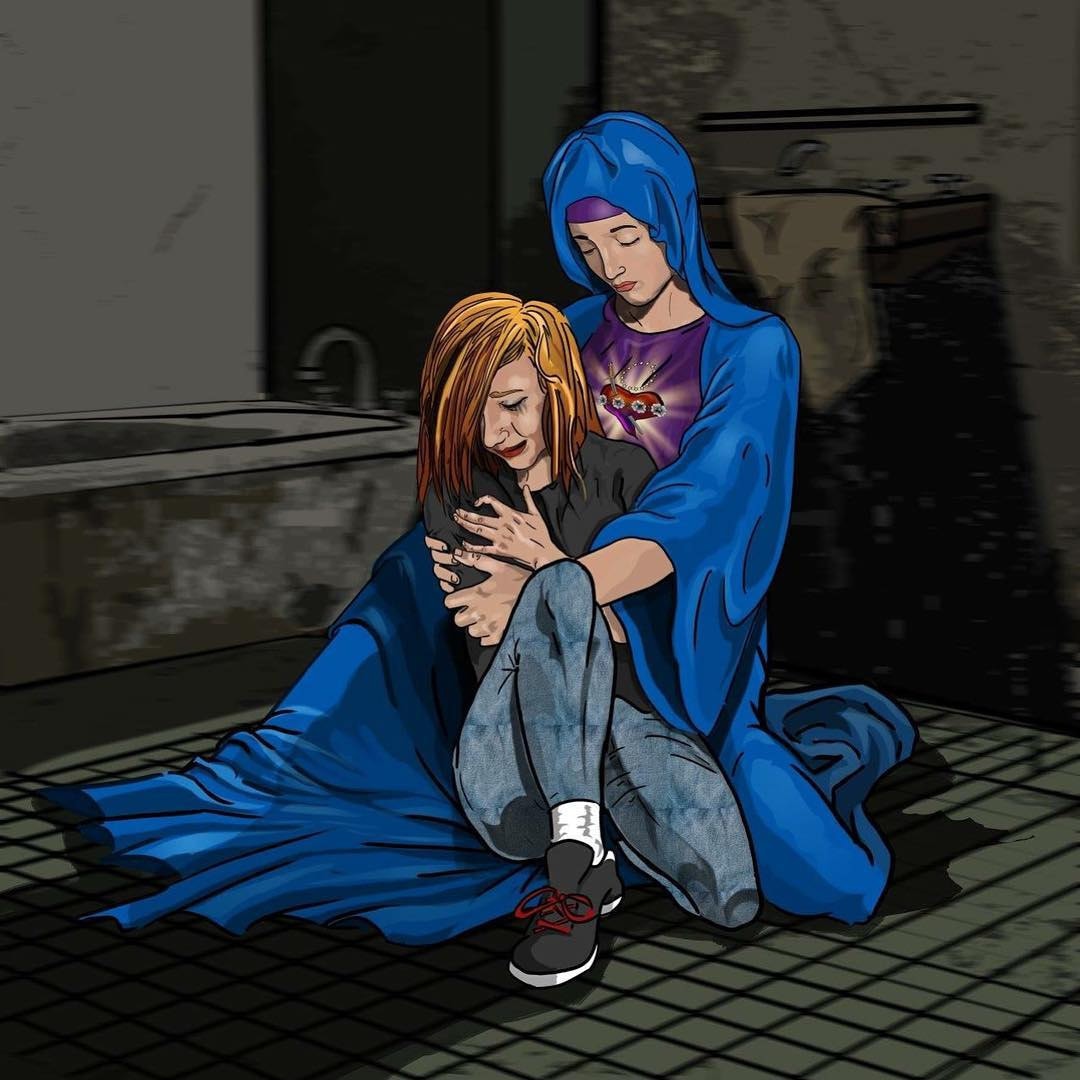 "When I find myself in times of trouble, Mother Mary comes to me. Speaking words of Wisdom, let it be." Our Lady of Sorrow shared in the suffering of Christ at the cross when she witnessed the unfair trial, mocking, and finally brutal execution of her son Jesus. Let her share in your sorrows and lift up your pain to her and allow her to sit with you at the foot of your crosses. During Advent the faithful are encouraged to reflect on the poor and less fortunate and give alms. Our Lady and St. Joseph were homeless that first Christmas Eve, finding no room at the inn. Can you make room for Christ, present in the poor, in your life. 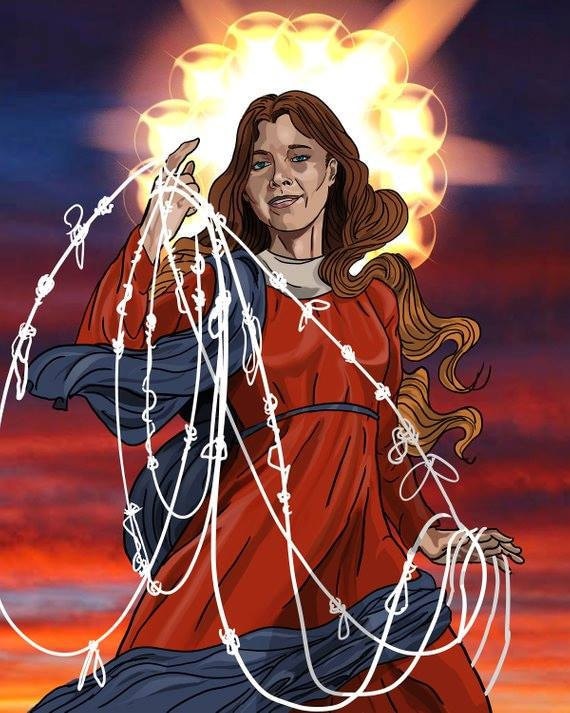 Our Lady of Undoer of Knots was a relatively unknown devotion until brought to the forefront by Pope Francis' devotion. Because of her obedience and willingness to do the will of God, Mary is seen as having undone the knot of Eve's disobedience. Those in trouble would do well to hand the knots in their own lives over to Our Lady. 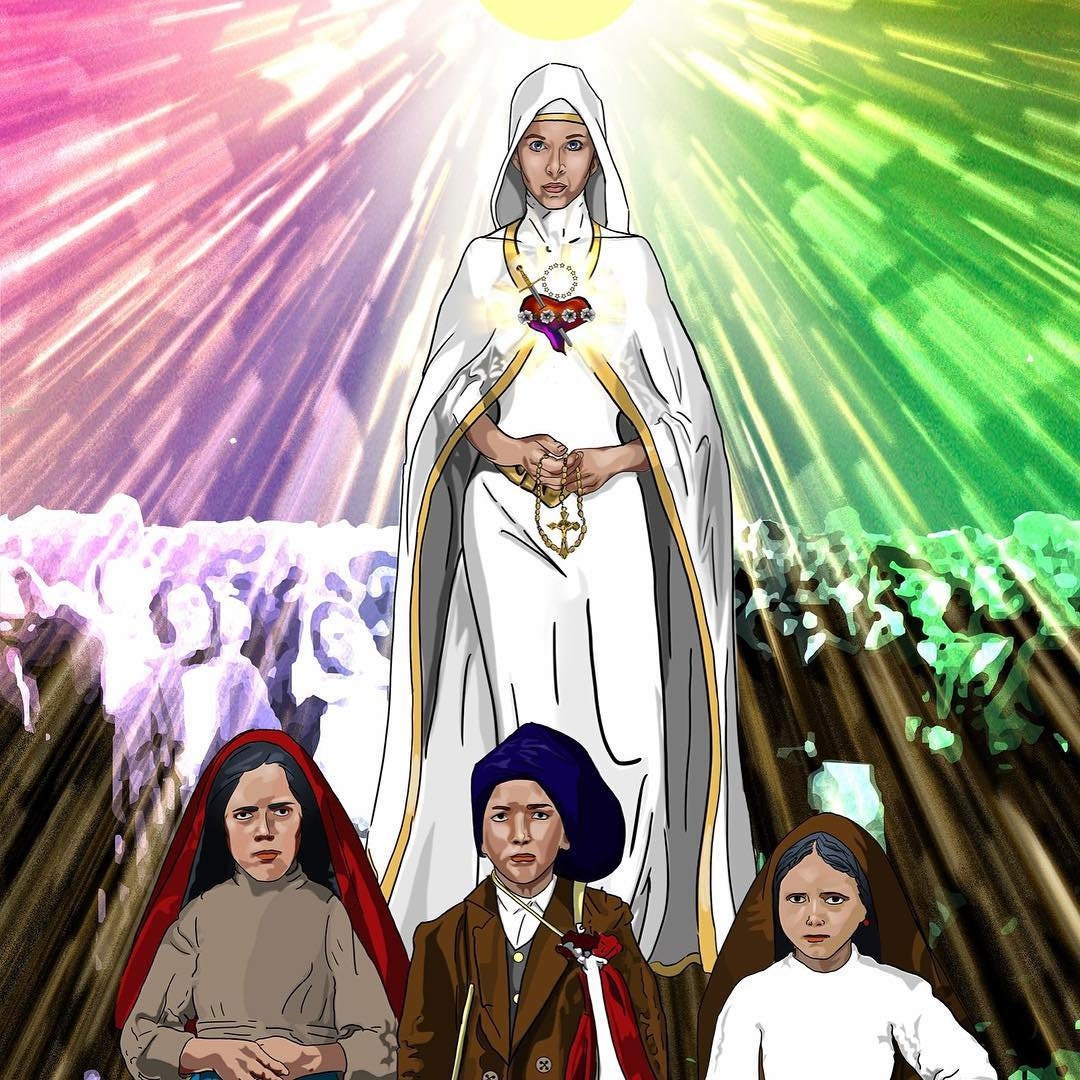 Our Lady of Fatima shows the Virgin Mary with the three visionary children of Fatima: St. Jacinta and Francesco Marto and Blessed Lucia Santos. In the background are the colorful rays from the miracle of the sun and the astonished onlookers. 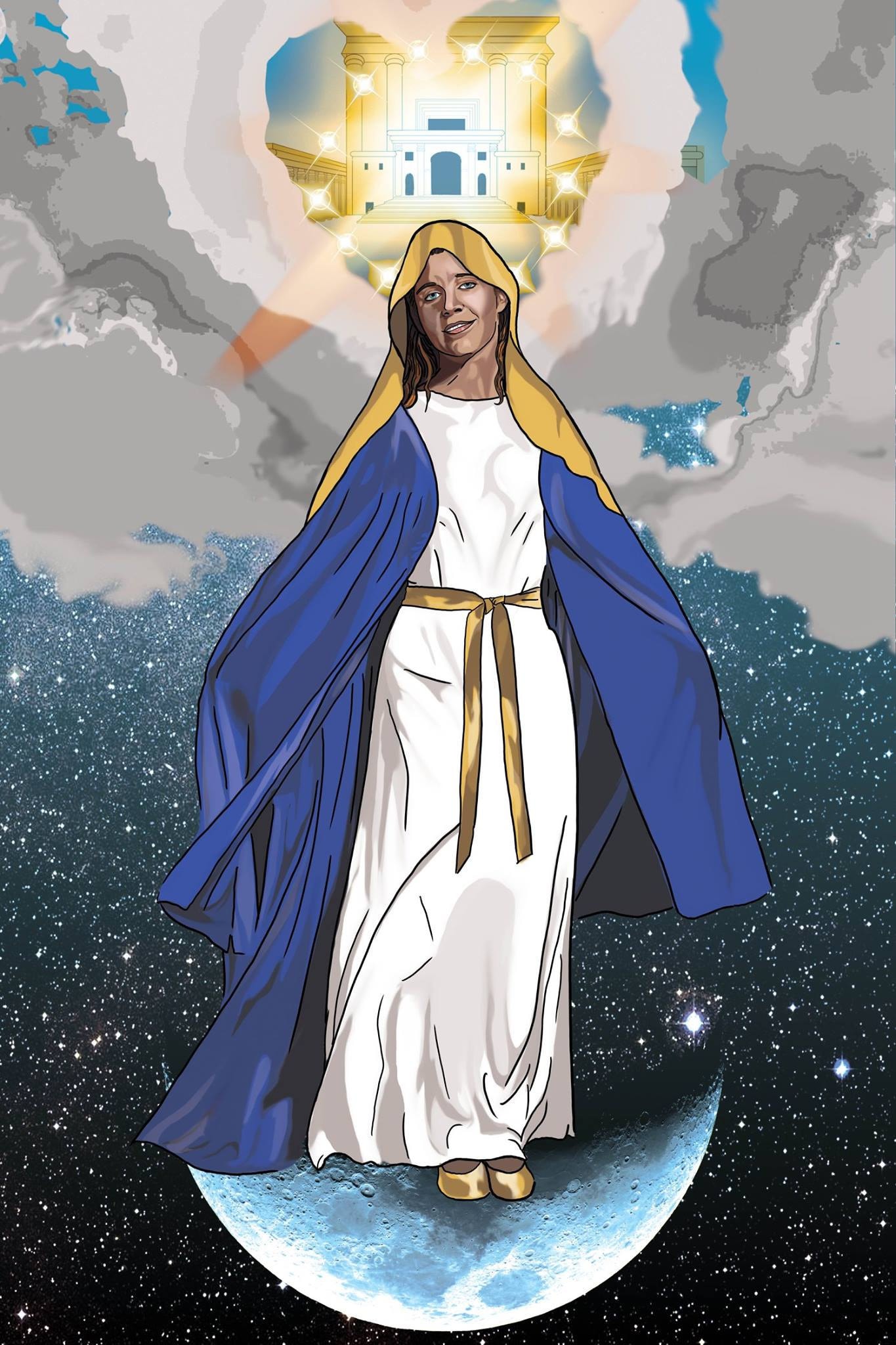 The Immaculate Conception shows Mary in her traditional Blue, White and Gold Mantle standing atop the moon and crowned with 12 Stars. 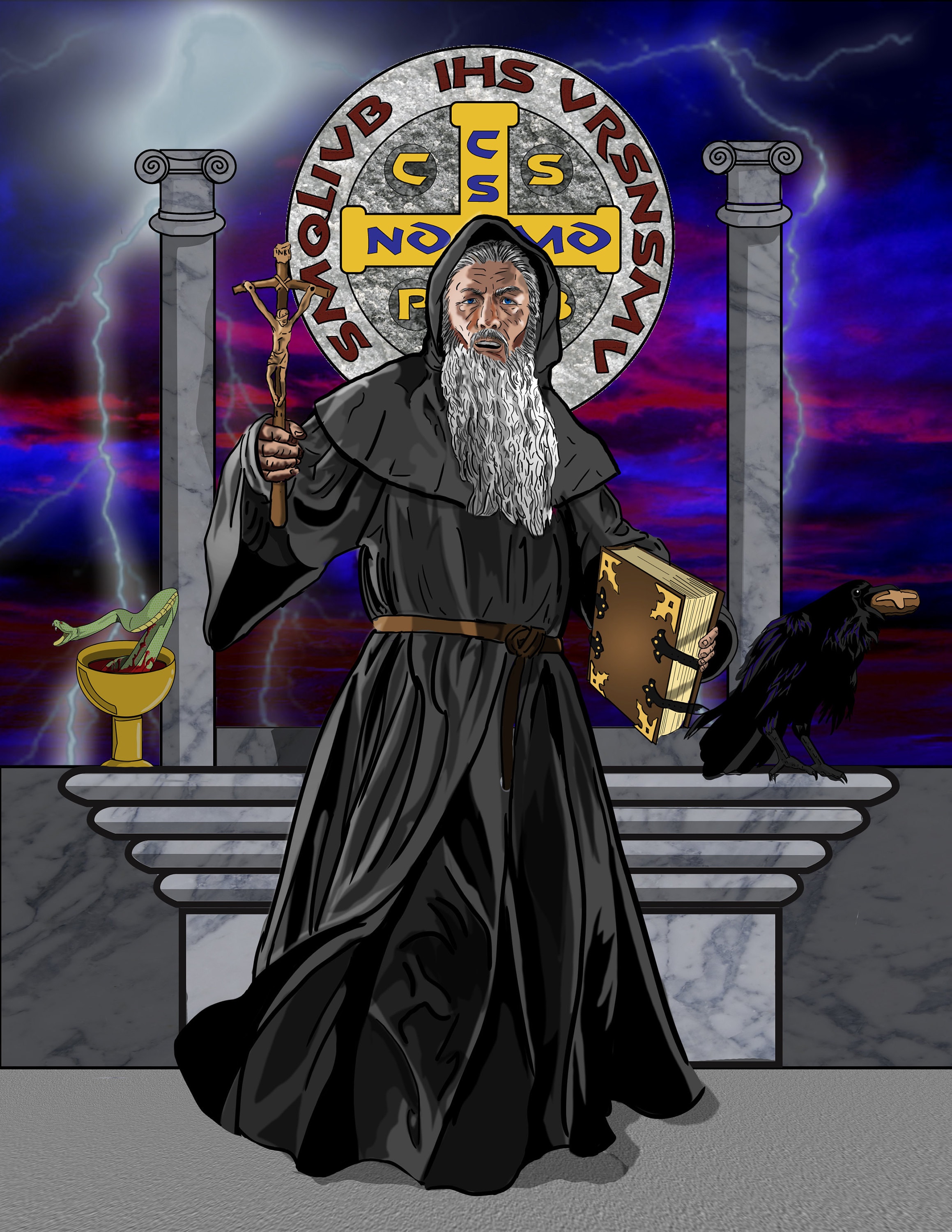 St. Benedict is known as the father of monasticism, savior of Western Civilization and a great combatant against evil. He is shown here as traditionally depicted on the back of the St. Benedict Medal holding his rule for monastic life in one hand and his crucifix in the other. Behind him are the poison cup and bread that were used to try and kill him as well as the front of the St. Benedict Medal. 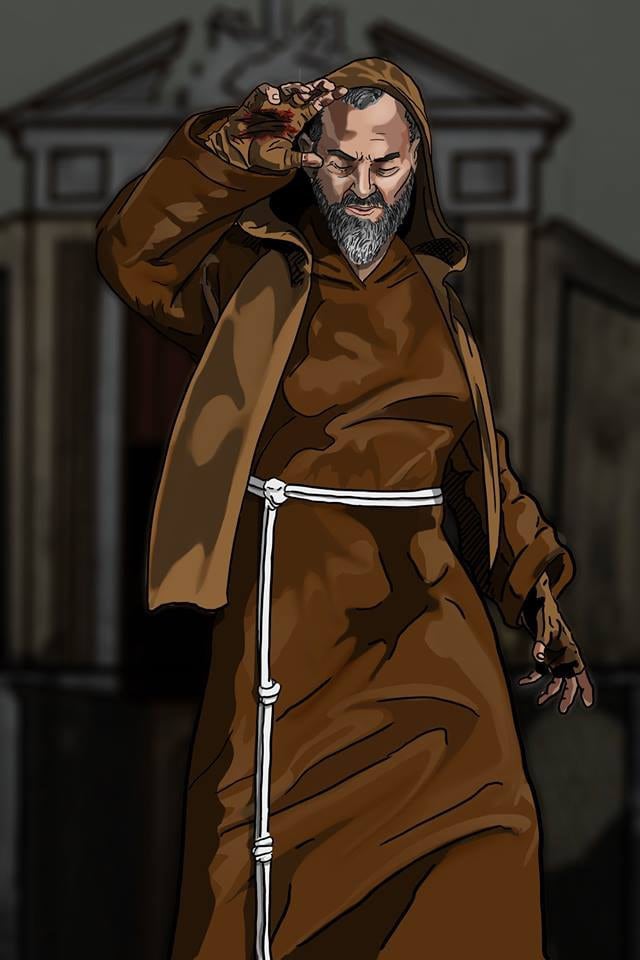 St. Padre Pio was a modern day priest of many miracles. In addition to having the stigmata, the wounds of Christ, he is also said to have biolocated (appearing in two places at the same time), levitating during prayer and the mass, and being able to read souls. He is shown hear in front of his confessional with stigmata on his hands and reading the soul of a penitent. 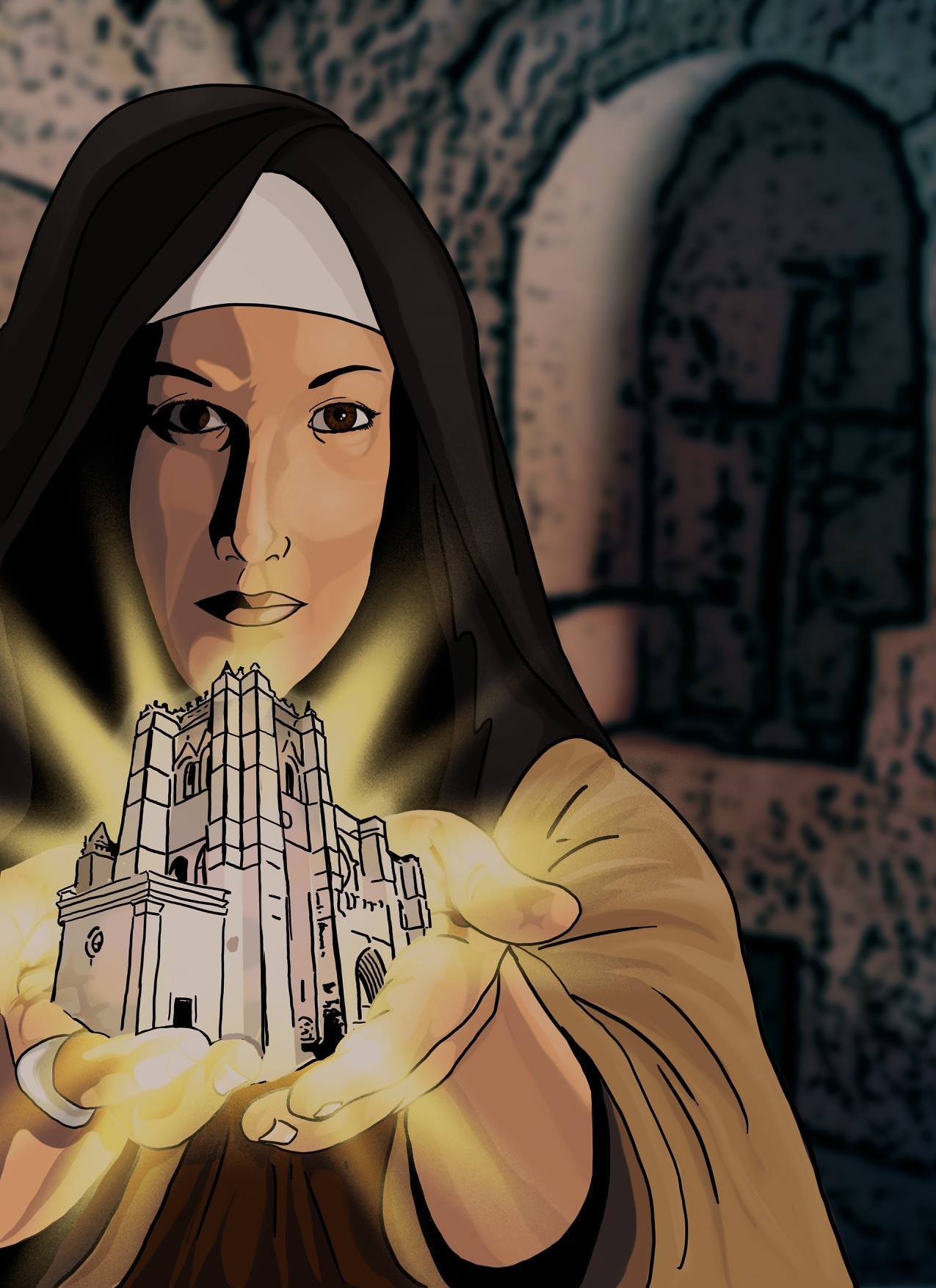 St. Teresa of Avila was famous Spanish mystic, author and was declared a Doctor of the Church, meaning her writings and life are highly encouraged for study by the faithful. Here she is shown in her Carmelite habit and presenting "The Interior Castle" her vision of the many levels of the spiritual life. 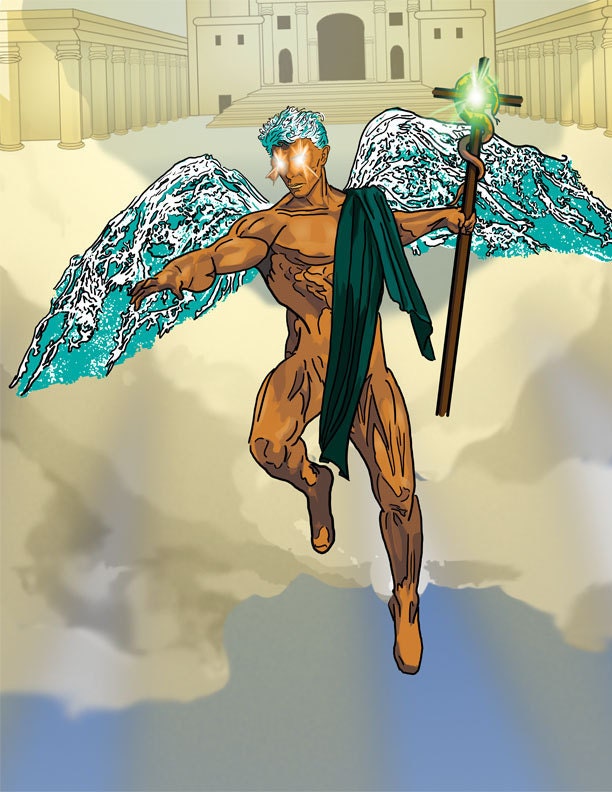 The Third named angel is scripture is Raphael who appears in the Old Testament book of Tobit as a guide and healer. He is also associated with the pool of Bethesda that is said to have healing properties in the New Testament. He is shown here with the Serpent on the Pole from the Book of Exodus and with wings and hair made of water because of his association with water. 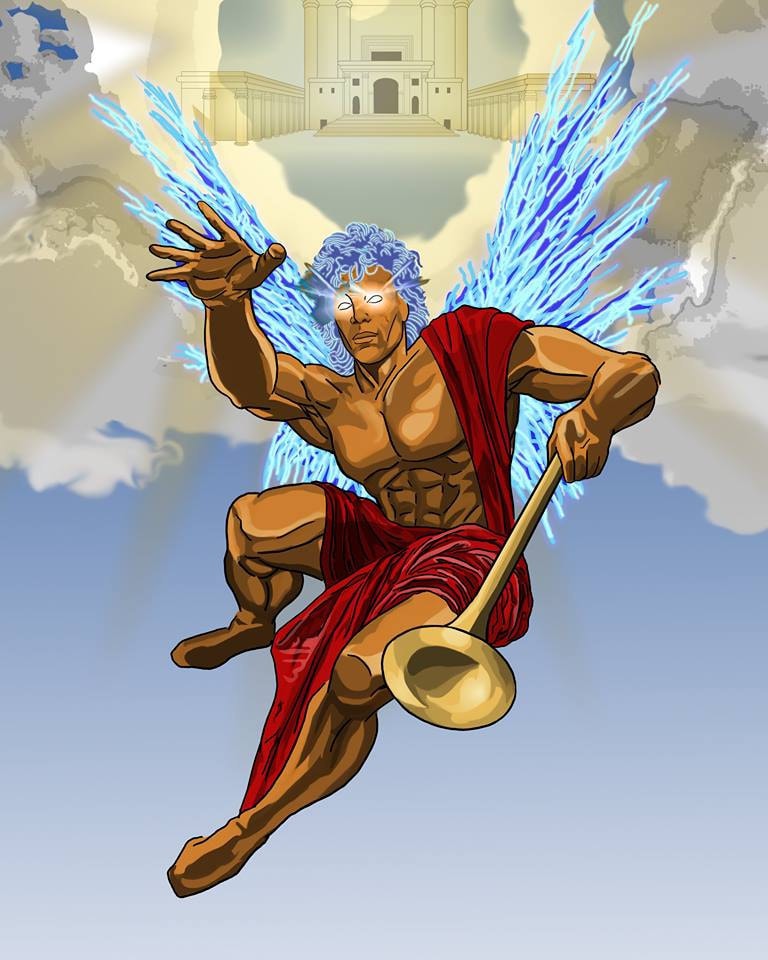 St. Gabriel is the second Angel depicted in the Bible. He appears to the Prophet Daniel in the Old Testament and to the priest Zechariah and Our Lady in the New Testament. Some traditions have him as the angel who announces the Resurrection to the women at the tomb and others as the angel with the trumpet in the book of Revelation. He is shown hear with the trumpet from Revelation and with wings and hair made of lighting for his association with the angel at the Resurrection. 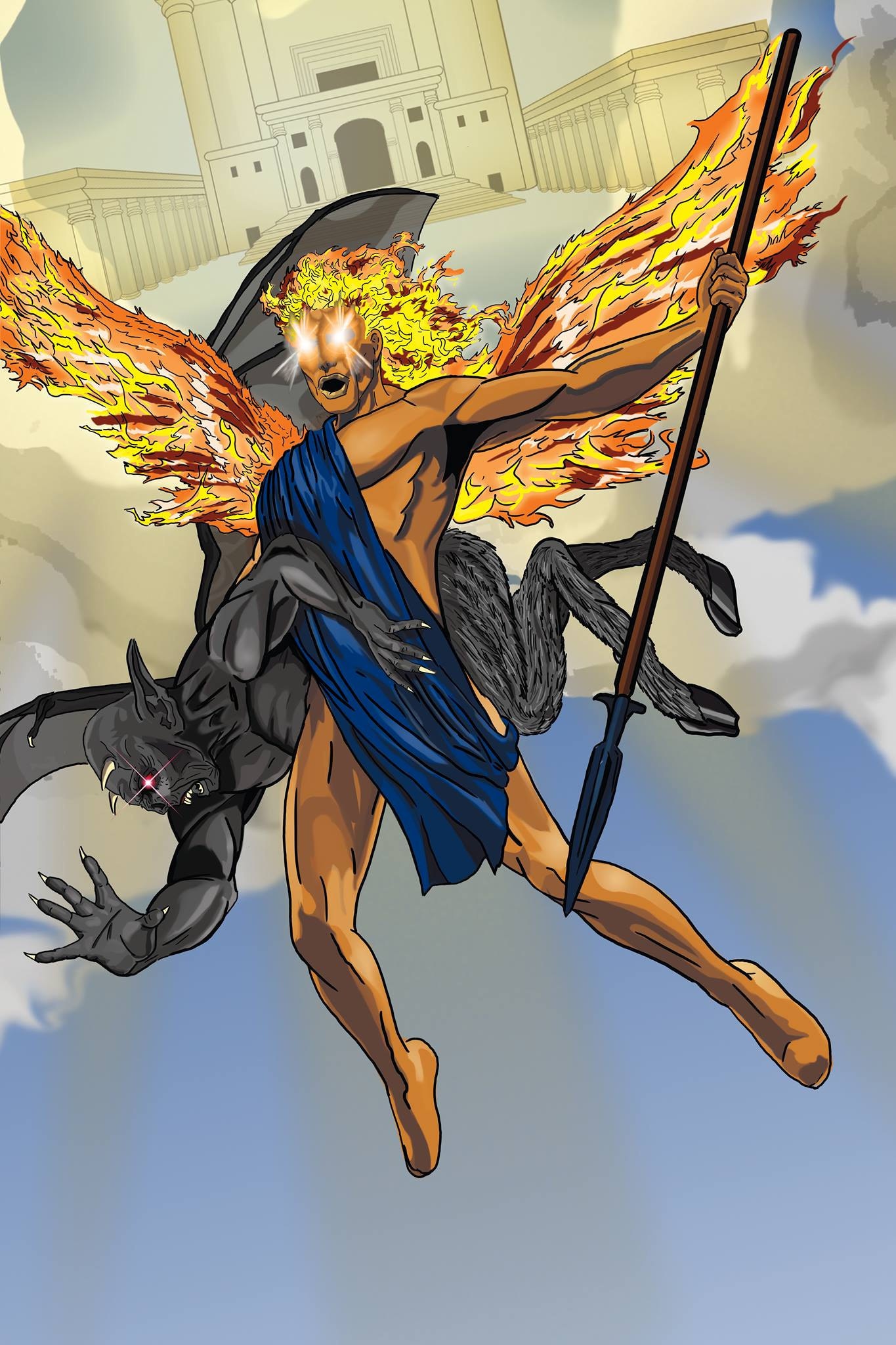 St. Michael the Archangel is the most prominent angel mentioned in the Bible. Featured in both the Old and New Testament he is traditionally depicted defeating Satan because he is described as having cast him out of Heaven. 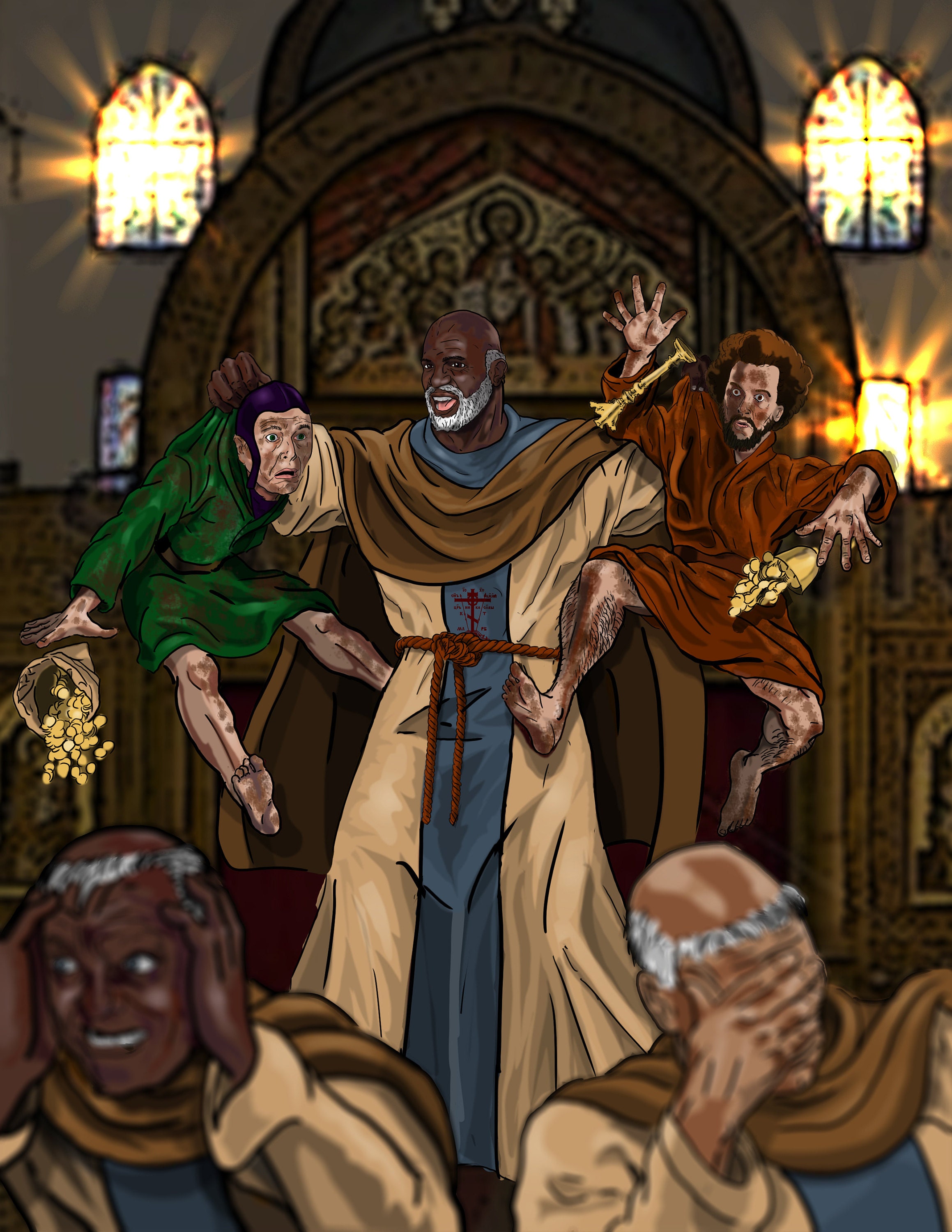 Relatively unknown today St. Moses the Strong was a "desert father" whose radical conversion from violent criminal to a holy man of peace is inspiring. 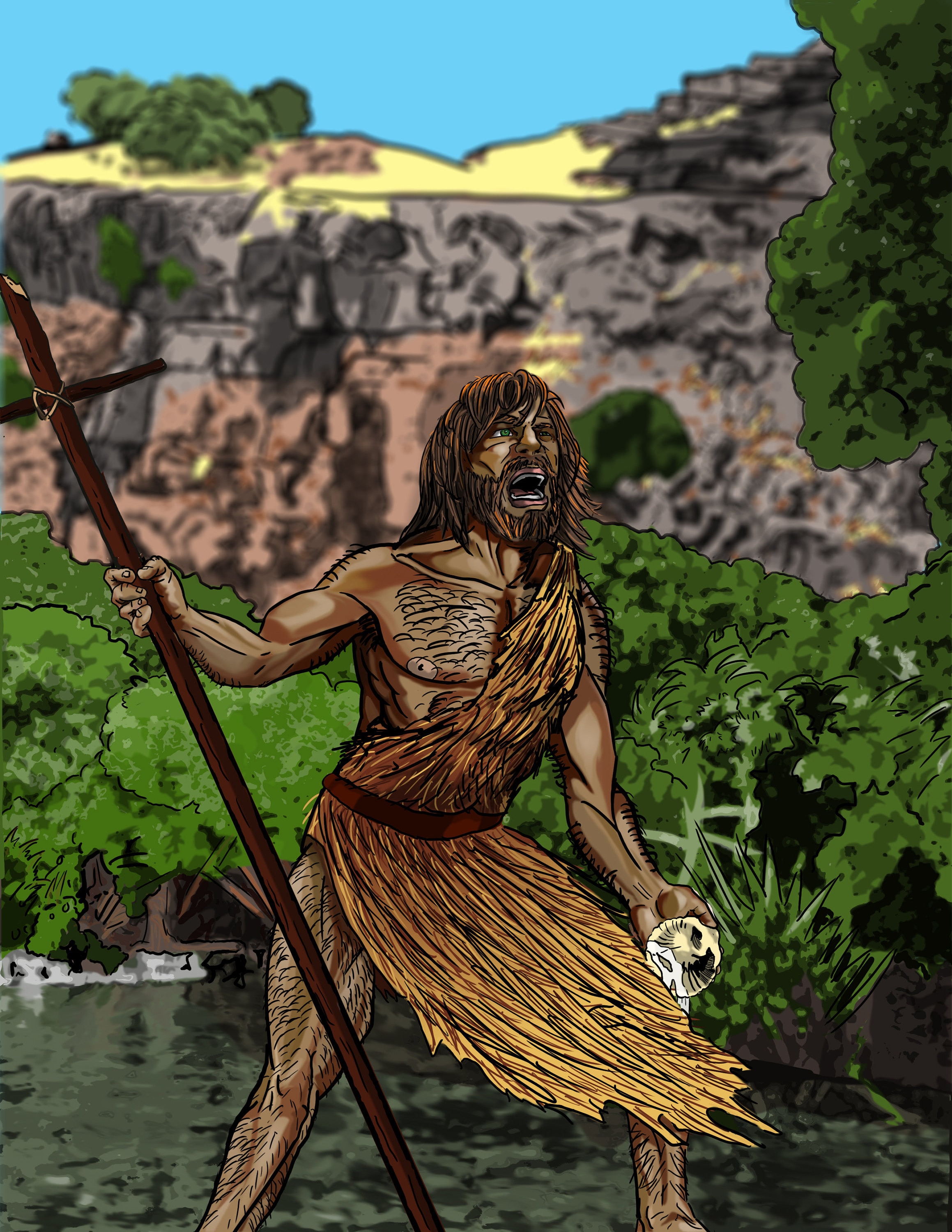 St, John the Baptist was a radical figure and is depicted here as a voice crying out the wilderness. 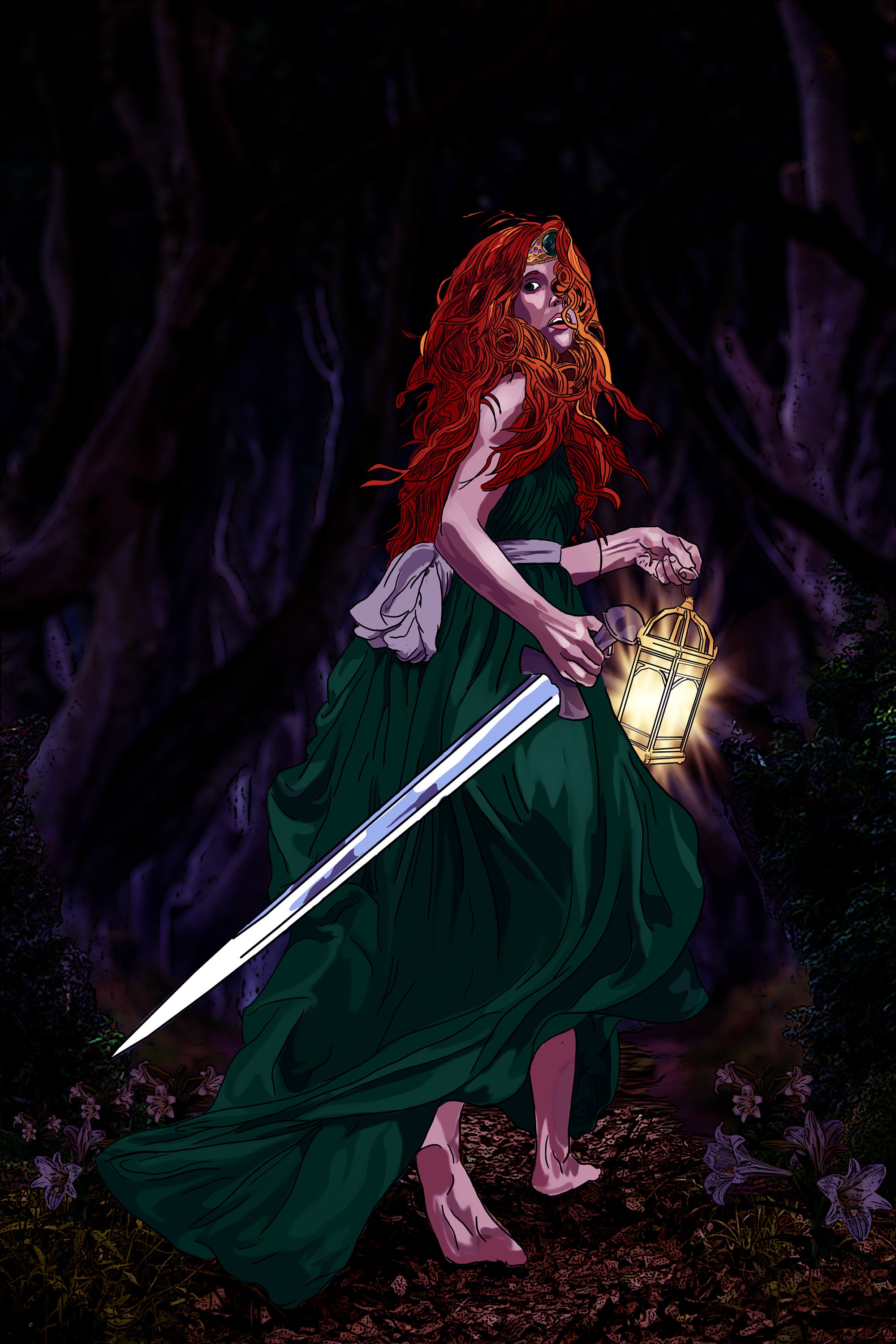 St. Dymphna escapes from her deranged father through the woods of Ireland. 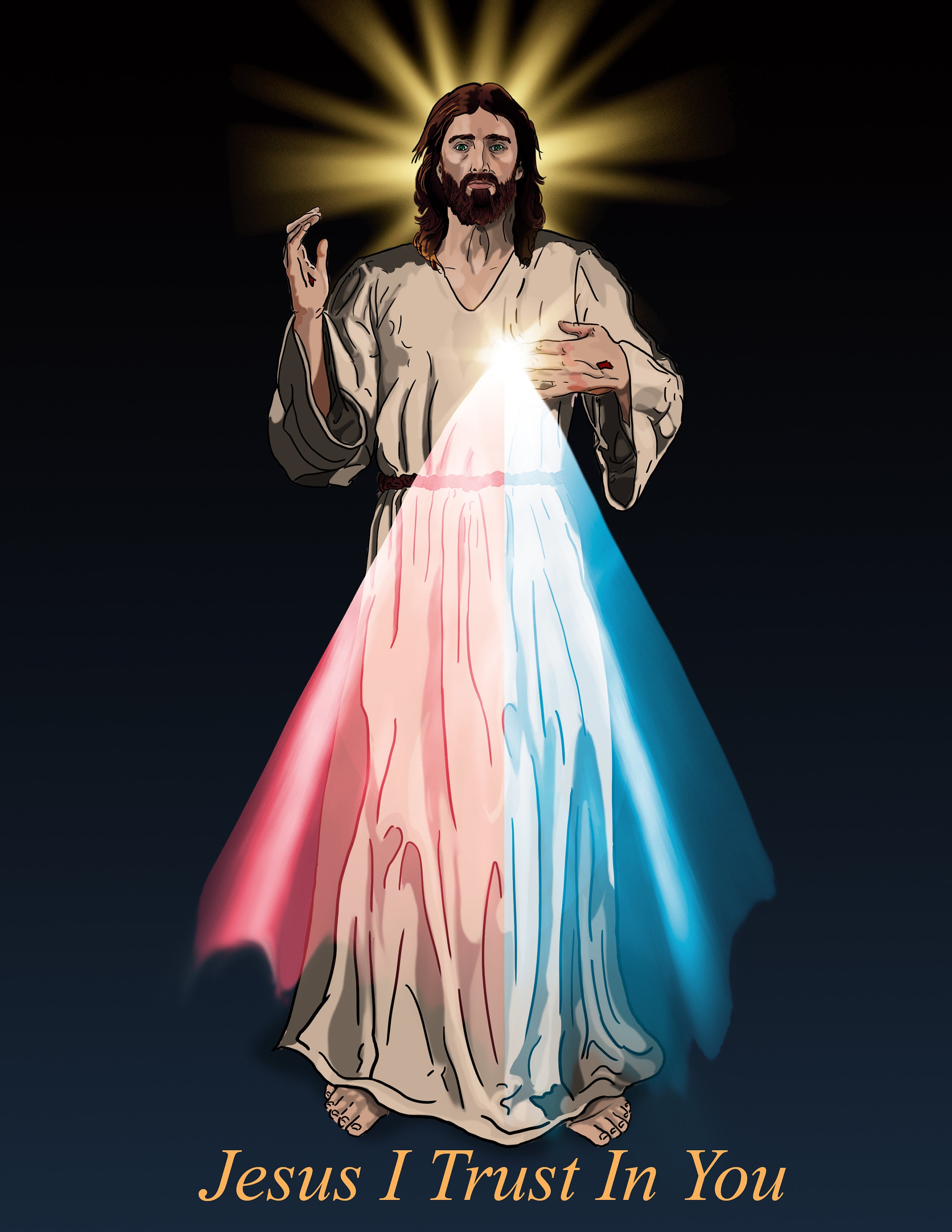 The image of Divine Mercy taking from the diary of St. Faustina and using the Shroud of Turin as the reference for the face of Jesus. 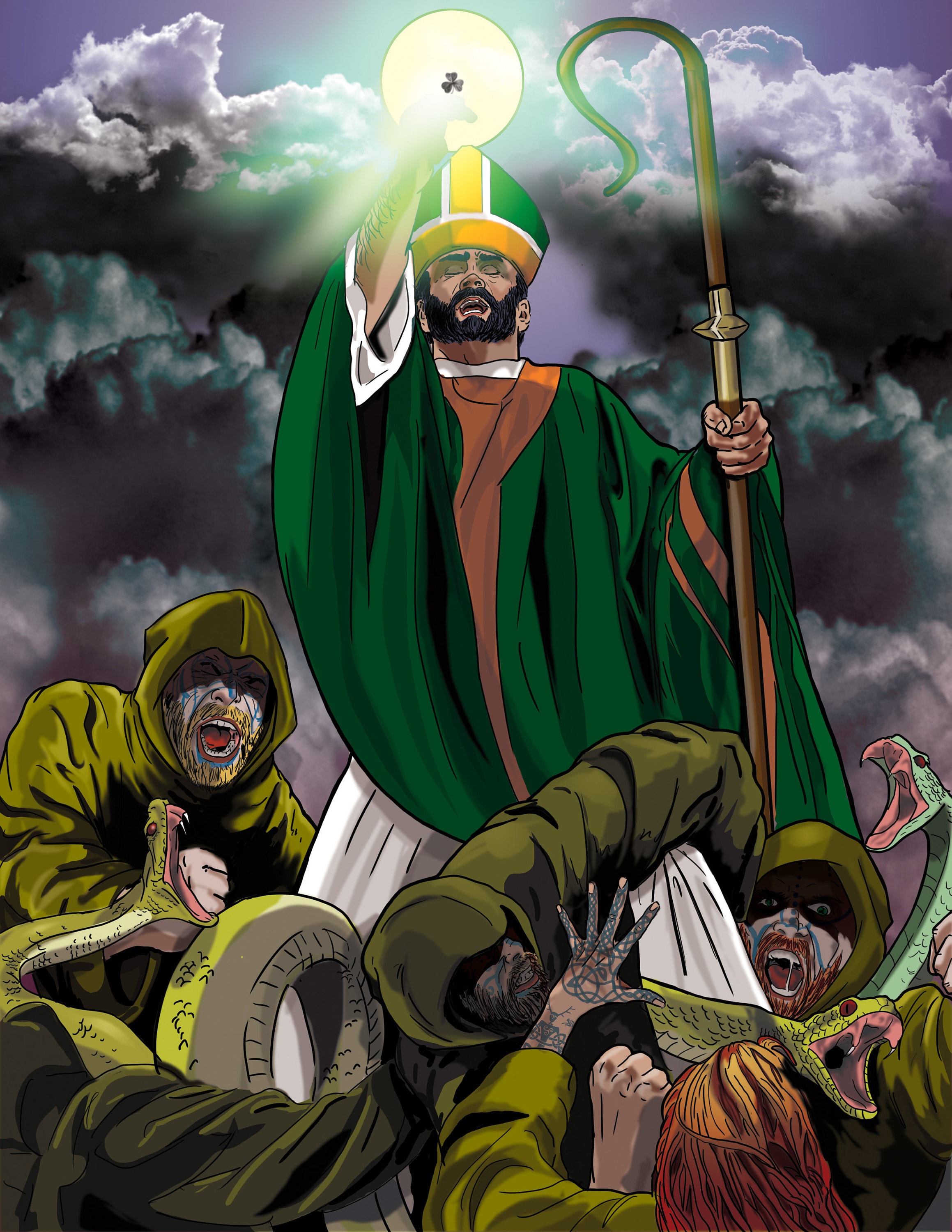 This image depicts some of the famous aspects of St. Patrick's life: driving the snakes and druids from Ireland and using the shamrock to explain the Holy Trinity