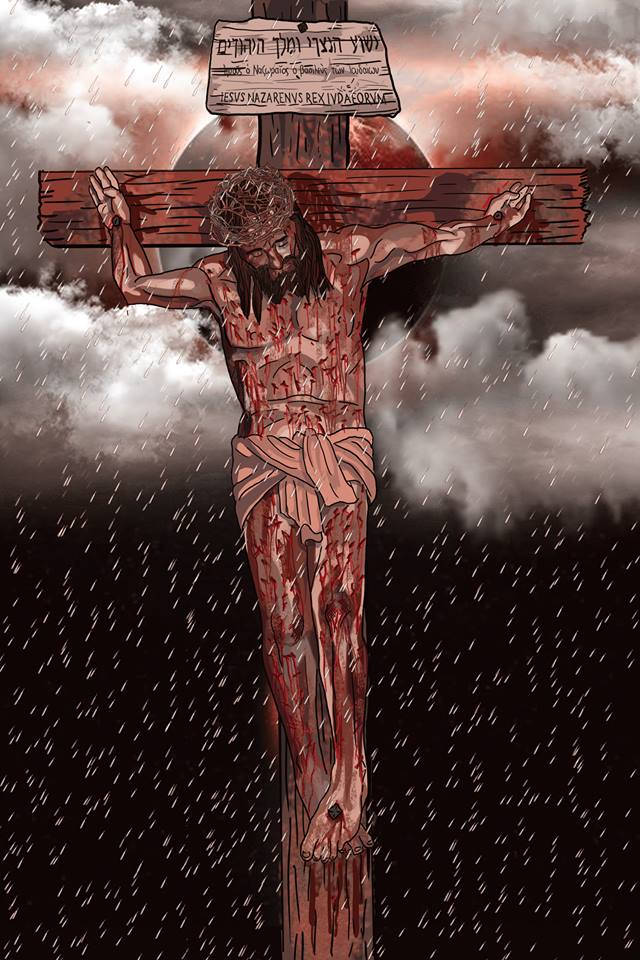 The Shroud of Turin gives many insights into the physical reality of what the Crucifixion of Jesus must have been like. This image of the crucifixion is based of the forensic research of the many scientists who have studied the Shroud. Let this image of Our Suffering Savior bring you closer in union to His Most Sacred Heart.

"The passion of Jesus is a sea of sorrows, but it is also an ocean of love. Ask the Lord to teach you to fish in this ocean. Dive into its depths. No matter how deep you go, you will never reach the bottom." - St. Paul of the Cross

:True reverence for the Lord’s passion means fixing the eyes of our heart on Jesus crucified and recognizing in him our own humanity." - Pope Leo the Great, Pope

"The fourth is the memory of the glorious pilgrimage of that immaculate lamb, Christ Jesus, and especially his most holy death and passion, keeping always before the eyes of our minds the presence of his most chaste and virginal humanity. This is the best means for winning each battle, and without it, we will not achieve victory over our enemies. Every other weapon will achieve little without this one which surpasses all the rest." - St. Catherine of Bologna

"Christians must lean on the Cross of Christ just as travelers lean on a staff when they begin a long journey. They must have the Passion of Christ deeply embedded in their minds and hearts, because only from it can they derive peace, grace, and truth." - St. Anthony of Padua

"The Blessed Eucharist is the perfect Sacrament of the Lord's Passion, since It contains Christ Himself and his Passion."-- St. Thomas Aquinas

"For when our Lord was suffering upon the cross, the tombs were burst open, the infernal region was disclosed, the souls leapt forth, the dead returned to life, and many of them were seen in Jerusalem, while the mystery of the cross was being perfected; what time our Lord trampled upon death, dissolved the enmity, bound the strong man, and raised the trophy of the cross, His body being lifted up upon it, that the body might appear on high, and death to be depressed under the foot of flesh. Then the heavenly powers wondered, the angels were astonished, the elements trembled, every creature was shaken while they looked on this new mystery, and the terrific spectacle which was being enacted in the universe. Yet the entire people, as unconscious of the mystery, exulted over Christ in derision; although the earth was rocking, the mountains, the valleys, and the sea were shaken, and every creature of God was smitten with confusion. The lights of heaven were afraid, the sun fled away, the moon disappeared, the stars withdrew their shining, the day came to end; the angel in astonishment departed from the temple after the rending of the veil, and darkness covered the earth on which its Lord had closed His eyes." - St. Alexander of Alexandria