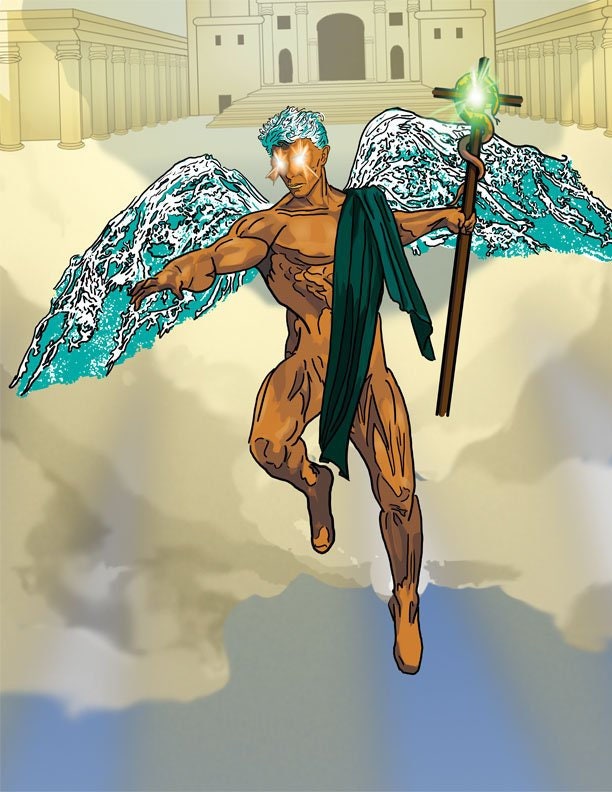 St. Raphael, whose name means "God Heals" is one of the seven Archangels to stand before the Throne of God as revealed in the Book of Tobit 12:15. In the Book of Tobit we learn of two afflicted people, Tobit and Sarah. Tobit lives in Ninevah and is blinded making him nearly helpless and leaves his marriage on the brink of ruin. In far away Medina lives Sarah who his plagued by the Demon of Lust Azmodeus, who slays every man she marries on their wedding night before it can be consummated. Both Tobit and Sarah are so despondent by their situation that they pray for death.

In a last ditch effort to save his family Tobit sends his son Tobiah on the long journey to Medina to collect money he has deposited there. St. Raphael disguises himself as a human named Azarias and he accompanies Tobiah on his journey. As the two travel by the river Tigris, on the way Tobiah is attacked by fish and the disguised Raphael tells the young man to kill the fish and remove it's heart, liver and gall bladder. Upon their arrival in Medina he then tells Tobiah of Sarah and that due to the cultural custom of the time Tobiah has a right to marry. To dispel the demon, Raphael instructs Tobiah to burn the liver and heart of the fish he killed, which drives the demon out into the desert who Raphael pursues and binds in Egypt. Tobiah married Sarah and after the wedding feast the the two accompanied by Raphael return to Ninevah where the angel instructs Tobiah to use the fish's gall bladder to cure his father's blindness. After he has guided Tobiah and healed Tobit Raphael reveals himself as an angel and returns to heaven.

In addition to his appearance in the Book of Tobit ancient Jewish legends believe the Raphael is the angel who dips his finger in the pool of Bethesda as mentioned in John 5:1–4 which was said to have healing properties. Because of the Book of Tobit and the Gospel of John, Saint Raphael is patron of travelers, the blind, happy meetings, nurses, physicians, medical workers, matchmakers, Christian marriage, and Catholic studies.